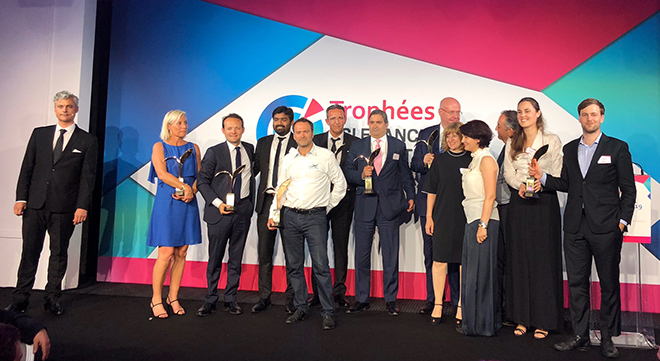 Boston, Massachusetts, & Paris, France, June 26, 2019 – PathMaker Neurosystems Inc. (“PathMaker”), a clinical-stage bioelectronic medicine company developing breakthrough non-invasive systems for the treatment of patients with spasticity and paralysis, is very pleased to announce that it has been named as the 2019 recipient of the CCI France International Trophy for Innovation at this year’s Trophées CCI France International.

Under the auspices of CCI France International, an international trade and development organization, and the patronage of the President of France, Emmanuel Macron, this prestigious French prize is awarded to recognize a company, across all technology sectors, that has developed a technological innovation which contributes to the development of economic relations between France, French companies, and the rest of the world. Selection criteria include major investments in research and development, use of new technologies, high growth potential, originality, avant-garde projects, and innovative ideas. Now in its second year of a global program, CCI France International selected PathMaker as one of 8 award recipients from amongst 150 nominees from 40 countries and awarded it the Innovation Prize.

“We are incredibly honored to have been named the recipient of this award, and would like to express our sincere appreciation to the CCI France International committee for this kind recognition of PathMaker’s progress in developing MyoRegulator®, our first-in-class, non-invasive device for the treatment of patients suffering from spasticity,” said Nader Yaghoubi, M.D., Ph.D., President and Chief Executive Officer of PathMaker. “Building on the momentum we received last year from the French-American Business (FAB) Award for Startup of the Year from FACCNE, the 2019 CCI France International Trophy for Innovation is a testament to the work done by our team and collaborators in bringing this breakthrough device to patients.”

CCI France International is a French non-profit association, which brings together 120 French Chambers in 90 countries, supporting 35,000 members worldwide. CCI France International was founded in 1907 to develop economic relations between France, French companies, and the rest of the world by working closely with French authorities and French institutions worldwide.

FACCNE is a non-profit, independent, member-driven organization dedicated to building a strong business community between France and New England. Since 1985, the FACCNE has been the primary solution in New England to facilitate interaction between French and American professionals. FACCNE promotes businesses by connecting entrepreneurs, business leaders and seasoned professionals through networking events, industry-specific workshops, and educational seminars and conferences. FACCNE also offers workshops for the development of young professionals.

PathMaker Neurosystems is a clinical-stage bioelectronic medicine company developing breakthrough non-invasive systems for the treatment of patients with chronic neuromotor conditions. With offices in Boston (U.S.) and Paris (France), we are collaborating with world-class institutions including the Brain and Spine Institute (Institut du Cerveau et de la Moelle Epinière – ICM) at the Pitié-Salpêtrière Hospital in Paris to rapidly bring to market disruptive products for treating spasticity, paralysis and muscle weakness. More than 48 million patients in the U.S., Europe and China suffer disabilities due to stroke, cerebral palsy, multiple sclerosis, spinal cord injury, traumatic brain injury, Parkinson’s disease and other neurological disorders. At PathMaker, we are opening up a new era of non-invasive neurotherapy for patients suffering from chronic neuromotor conditions. For more information, please visit the company website at www.pmneuro.com.